We Make the Best dentures in the Market. We make them Look real and comfortable.

From dentures to bridges and crowns, we can provide you with just the service you want.
Quality Dental Laboratory combines the latest technology, equipment and materials with professional.

When your denture or partial denture is received by our dental lab, it is examined, repaired, and shipped back to you on the same day according to the shipping method of your choice.

How do you wear a removable partial denture?

How long will it take to get used to wearing a denture?

For the first few weeks, your new partial denture may feel awkward or bulky. However, your mouth will eventually become accustomed to wearing it. Inserting and removing the denture will require some practice. Follow all instructions given by your dentist. Your denture should fit into place with relative ease. Never force the partial denture into position by biting down. This could bend or break the clasps

How long should I wear the denture?

Your dentist will give you specific instruction about how long the denture should be worn and when it should be removed. Initially, you may be asked to wear your partial denture all the time. Although this may be temporarily uncomfortable, it is the quickest way to identify those denture parts that may need adjustment. If the denture puts too much pressure on a particular area, that spot will become sore. Your dentist will adjust the denture to fit more comfortably. After making adjustments, your dentist will probably recommend that you take the denture out of your mouth before going to bed and replace it in the morning.

Will it be difficult to eat with a partial denture?

Replacing missing teeth should make eating a more pleasant experience. Start out by eating soft foods that are cut into small pieces. Chew on both sides of the mouth to keep even pressure on the denture. Avoid foods that are extremely sticky or hard. You may want to avoid chewing gum while you adjust to the denture
Serving Boston MA


Will the denture change how I speak?

It can be difficult to speak clearly when you are missing teeth. Consequently, wearing a partial denture may help. If you find it difficult to pronounce certain words with your new denture, practice reading out loud. Repeat the words that give you trouble. With time, you will become accustomed to speaking properly with your denture.

How do I take care of my denture?

Handling a denture requires care. It's a good idea to stand over a folded towel or a sink of water just in case you accidentally drop the denture. Brush the denture each day to remove food deposits and plaque. Brushing your denture helps prevent the appliance from becoming permanently stained. It's best to use a brush that is designed for cleaning dentures Lynn ma . A denture brush has bristles that are arranged to fit the shape of the denture. A regular, soft-bristled toothbrush is also acceptable. Avoid using a brush with hard bristles, which can damage the denture
Your dentist can recommend a denture cleaner. Look for denture cleansers with the American Dental Association (ADA)  Seal of Acceptance. Products with the ADA Seal have  evaluated for safety and effectiveness.
Some people use hand soap or mild dish washing liquid to clean their dentures, wellesley MA which are both acceptable. Other types of household cleaners and many toothpastes are too abrasive and should not be used for cleaning dentures.
Clean your dentures by thoroughly rinsing off loose food particles. Moisten the brush and apply the denture cleaner. Brush all denture surfaces gently to avoid damaging the plastic or bending the attachments. Acton MA
A denture could lose its proper shape if it is not kept moist. At night, the denture should be placed in soaking solution or water. However, if the appliance has metal attachments, they could be tarnished if placed in soaking solution. Your dentist can recommend the proper method for keeping your dentures in good shape.

Will my denture need adjusting?

Over time, adjusting the denture may be necessary. As you age, your mouth naturally changes, which can affect the fit of the denture. Your bone and gum ridges can recede or shrink, resulting in a loose-fitting denture. Dentures that do not fit properly should be adjusted by your dentist. Loose dentures can cause various problems, including sores or infections. See your dentist promptly if your denture becomes loose Boston MA.

Can I make minor adjustments or repairs to my denture?

You can do serious harm to your denture and to your health by trying to adjust or repair your denture. A denture that is not made to fit precisely by a dentist can cause irritation and sores. Using a do-it-yourself kit can damage the appliance beyond repair. Glues sold over-the-counter often contain harmful chemicals and should not be used on a denture.
If your denture no longer fits properly, if it breaks, cracks or chips, or if one of the teeth becomes loose, see your dentist immediately. In many cases, dentists can make necessary adjustments or repairs, often on the same day. Complicated repairs may require that the denture be sent to a special dental laboratory.

Must I do anything special to take care of my mouth?

Brushing twice a day and cleaning between your teeth daily help prevent tooth decay and periodontal (gum) disease that can lead to tooth loss. Pay special attention to cleaning teeth that fit under the denture's metal clasps. Plaque that becomes trapped under the clasps will increase the risk of tooth decay. Your dentist or dental hygienist can demonstrate how to properly brush and clean between teeth. Selecting a balanced diet for proper nutrition is also important

How often should I see my dentist?

Your dentist will advise you on the frequency of dental visits. Regular dental check-ups and having your teeth professionally cleaned are vital for maintaining a healthy smile.

How can I fill the gap? 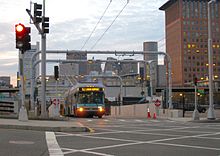 A bus on the SL4 route at Newton Street station in

The SL5 route was created in 2002 as a replacement for the Washington Street Elevated. The Shuttle route began operations in 2004, followed by the SL2 and SL3 (former) in 2004 and SL1 in 2005 when dual-mode buses became available. The SL4 was introduced in 2009 as a replacement for the canceled Phase III tunnel. A new SL3 route to Chelsea opened in 2018.[1]

The crosstown (CT) buses provide limited-stop service on two routes that connect major subway and bus transfer points. The routes were created by the MBTA in 1994.[1]

A #39 bus on Centre Street in Jamaica Plain

A bus on the #43 route, one of the last to be converted from streetcar to bus, stands alongside an SL5 bus on Tremont Street

A #59 bus stopped in Needham Center 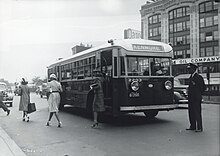 A #77A trolleybus on Massachusetts Avenue in 1967

A #91 bus on Washington Street

A #101 bus on Main Street in Somerville

These routes provide almost all local service in the core of the metropolitan area; most were originally Boston Elevated Railway streetcar routes. They were originally numbered roughly clockwise from southeast to northeast, with 4 the furthest south in South Boston and 121 the furthest north (roughly) in East Boston. The BERy folded into the Metropolitan Transit Authority in 1947, and the M.T.A. in turn was reorganized as the MBTA in 1964. Despite some changes, including minor routes being merged into trunk routes, the core service network has remained roughly intact since the BERy eta. Several new routes, including the 1, 5, and 47, have been added during the M.T.A. and MBTA eras.[1]

Seven routes – the 52, 59, 62, 67, 70, 70A, and 76 – serve more distant western suburbs, such as Belmont, Lexington, and Needham; most were acquired from the Middlesex and Boston Street Railway in 1972, and subsequently renumbered using previously discontinued designations.[1]

Fifteen of these routes (those with the highest ridership in the system) are designated as key bus routes; they supplement the subway system to provide frequent service to the densest areas of the city. Key bus routes typically operate at higher frequencies than their undesignated cousins, and in March 2014 their hours of service were extended until 2:30AM on Friday and Saturday nights along with the rapid transit system.[2] In mid-2015, late-night service on some key bus routes was cut back, while other routes were dropped from late-night service.

Key bus routes are designated on this list with an *.

Numbers from 131 to 137 operate in the Melrose area; their routings are based on routes operated as part of the former Eastern Massachusetts Street Railway, which was folded into the MBTA system in 1968. The 136 and 137 were briefly operated as far as Lowell and Lawrence, their original Eastern Mass terminals, while under MBTA control. The 132 was a Service Bus Lines route which was not operated by the MBTA until 1975.[1]

170 and 171 are special low-service routes, the 170 a variant of the 70 introduced in 1968 and the 171 a replacement for early morning CT3 service when it was cut back from Logan Airport in 2002. Other numbers in the 170s were used for largely short-lived routes serving industrial areas.[1]

Routes from 191 to 194 are single round trips in the early morning, mainly meant for subway fare collectors but open to the public. They were introduced by the M.T.A. in 1960.[1]

Route 195 is a special low-service route not open to the general public nor shown on MBTA maps. It connects downtown Boston with the homeless shelter at Lemuel Shattuck Hospital. Until September 2015, the route was numbered 277 to match routes 274-276 (which connected downtown Boston to the Long Island Health Campus and were suspended due to the closure of Long Island Bridge in October 2014.)[1]

These routes operate in the Quincy area. Routes 210-245 are based on routes originally operated by the Eastern Massachusetts Street Railway (folded into the MBTA in 1968) which mostly ran into Fields Corner station. When the Red Line's Braintree Branch opened in the 1970s, these routes were rerouted to terminate at the new rapid transit stations (principally Quincy Center).[1] 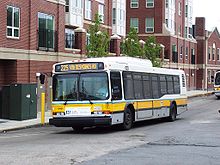 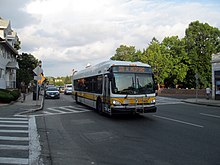 These routes operate express between Medford and downtown Boston. They were introduced by the MBTA in June 1973.[1] 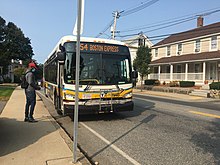 These routes operate in the Burlington area. They are the remains of the Eastern Massachusetts Street Railway's Lowell Division, which was inherited intact by the MBTA in 1968 and gradually declined thereafter.[1]

These routes operate in the Lynn area and the North Shore. Two routes that run to Haymarket have weekend short-turn variants (labeled with a W suffix) that terminate at Wonderland. The 411 and 430 were Service Bus Lines routes that were acquired by the MBTA in 1975; the other routes are largely Eastern Massachusetts Street Railway routes acquired in 1968.[1]

These routes operate express between Newton and downtown Boston via the Massachusetts Turnpike (I-90). The 500 series routes were created by the MBTA in the 1960s to take advantage of the newly constructed turnpike extension into Boston. The 550 series routes were Middlesex and Boston Street Railway routes to Newton Corner that were extended to downtown Boston in the 1960s and taken over by the MBTA in 1972.[1] 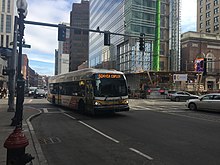 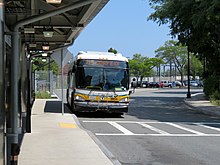 The MBTA provides partial subsidy for some suburban routes outside its usual service area that connect with MBTA bus, subway, or commuter rail service. Routes 710-716 are radial commuter routes that accept MBTA passes on CharlieTickets only; they were taken over from various private operators (Hudson Bus Lines for the 710 and 716, Rapid Transit Inc. for the 712/713, and Nantasket Transportation for the 714).[1]

The non-numbered routes (listed here by their designator on MBTA maps) are local circulator services founded by the municipalities with partial MBTA subsidy.[1] All are operated by private companies under contract, except for the Beverly Shuttle which is operated by the Cape Ann Transportation Authority.